Jacob chose the theme for his fourth birthday party soon after his third. He LOVED having a party for his birthday, and after his third birthday train party, he was on cloud nine. He told everyone we met about it. He even told me about the party and how I “should have been there.” I latched on to the construction idea, and when it was time to plan, the ideas were flowing. Unfortunately, between the difference in life with 2 kids this year and one being a small baby, and the business of the holidays, and the fact that I was sick from about Thanksgiving until mid-January, I didn’t have as much time to dedicate to this party as I would have liked. Most of the party details came together at the last minute, with help, and some were not finished. BUT! It was super fun and Jacob just absolutely loved it. I don’t think he could have had a better time. It seemed like all the kids were engaged and having fun, and with nary a bounce house in sight. Imagine that. 😉

The awesomest detail, to me, was this wrecking ball. The post is made from last year’s train crossing sign and a tetherball spray-painted black (thanks, dad!). The “building” pieces are salvaged cardboard boxes covered in brick-printed backdrop plastic. My rockstar next-door neighbors came over the day before the party and helped me to wrap them. 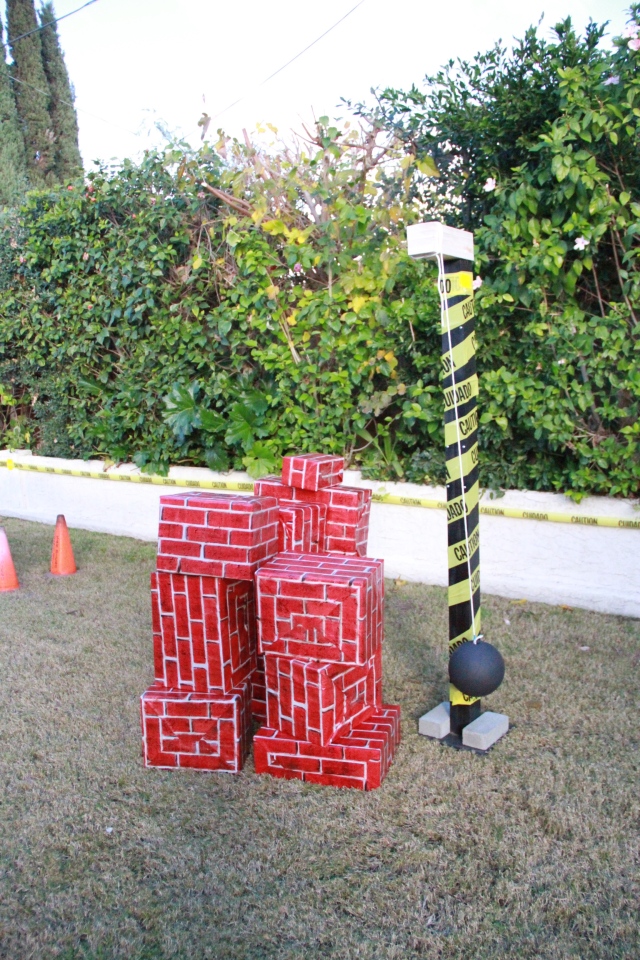 This photo prop was borrowed from Lisa’s friend! So CUTE!

A tarp, some pea gravel, and Jacob’s Tonka trucks. In the foreground, Jacob’s table has some temporary tattoos waiting to be applied.

99 cent store paintbrushes come three to a pack, and were great for this “water painting” craft. Kids can “paint” the concrete with water. Temporary and mess-free!

Jacob’s birthday gift from Bop and Mimi came in handy! Sand play for the kids with CAT vehicles also from…you guessed it…the 99 cent store. And they are still being played with of course! 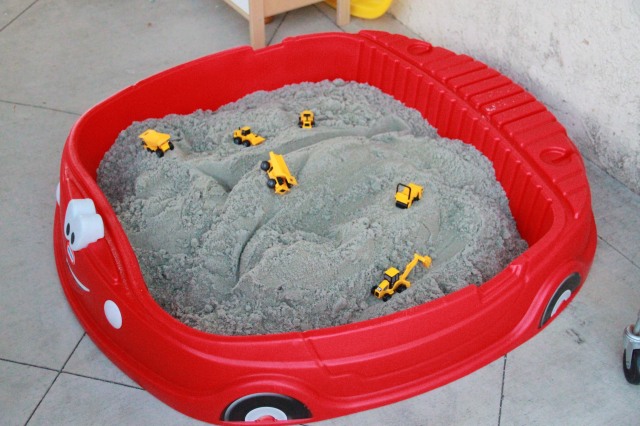 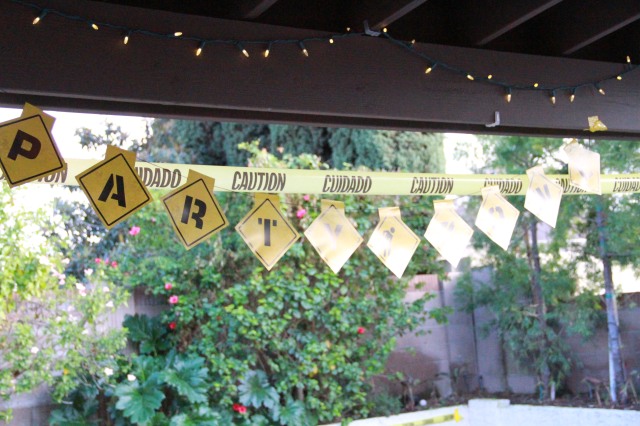 The table below is where I set up the food. We had a chili bar and a nacho bar–both things were supplied along with toppings and paper trays. 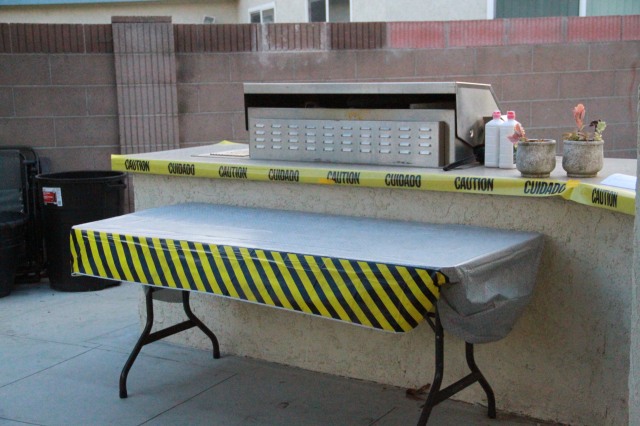 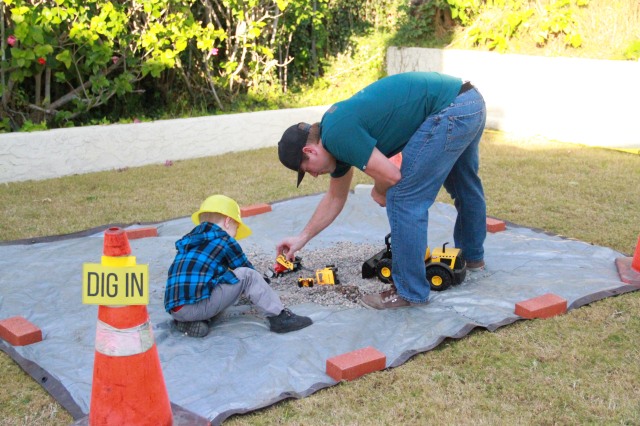 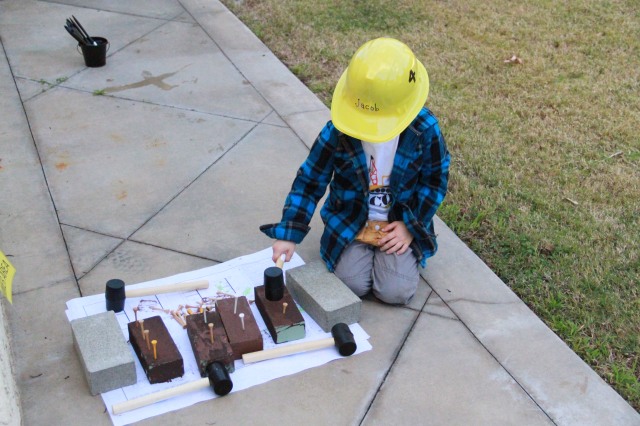 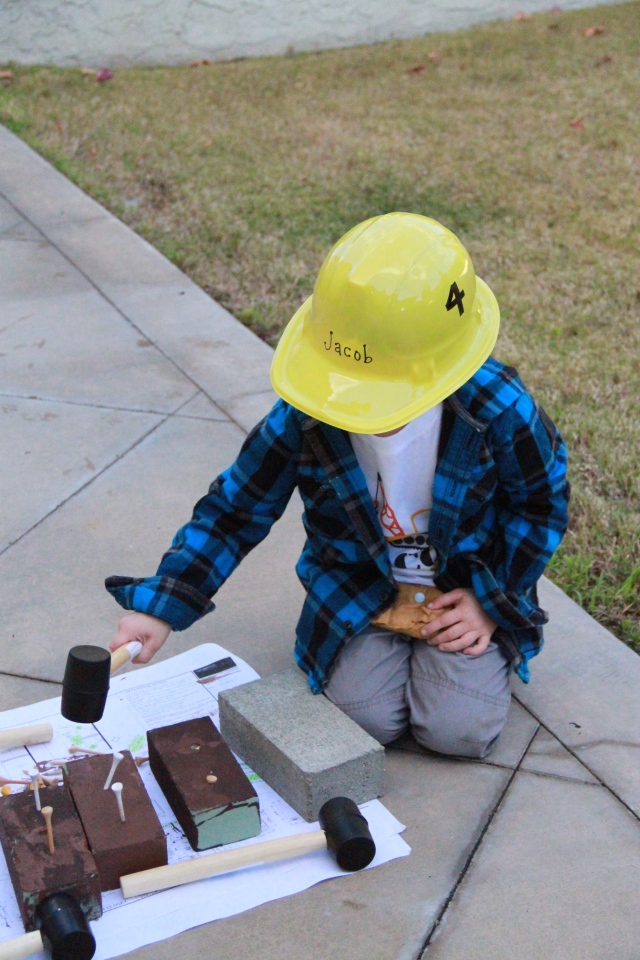 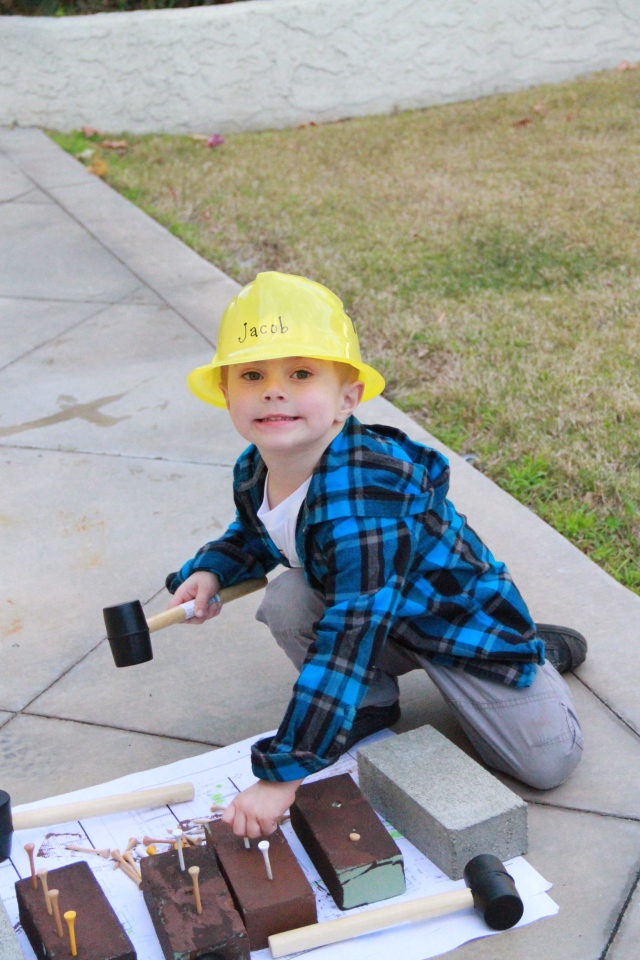 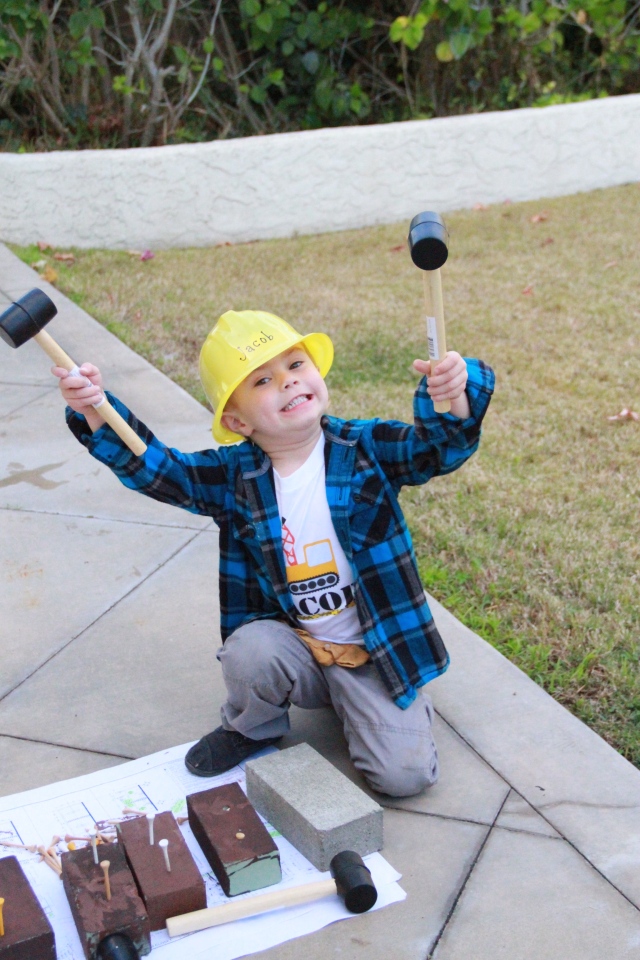 The favors for each child consisted of a Home Depot tool apron (77 cents), a slap bracelet, construction pencil, and a tool-shaped lollipop. 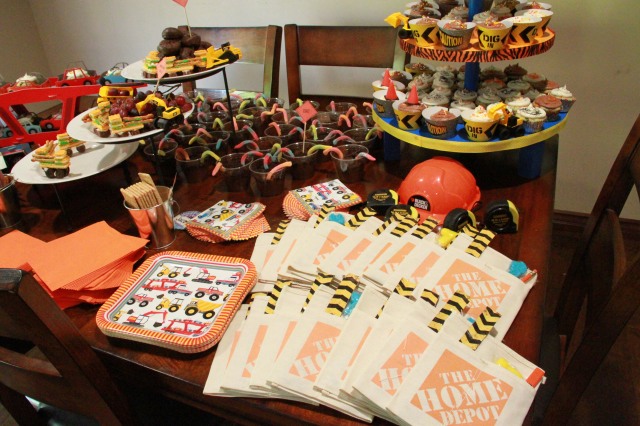 The cake was a homemade chocolate cake with chocolate buttercream which is being excavated by a CAT digger. 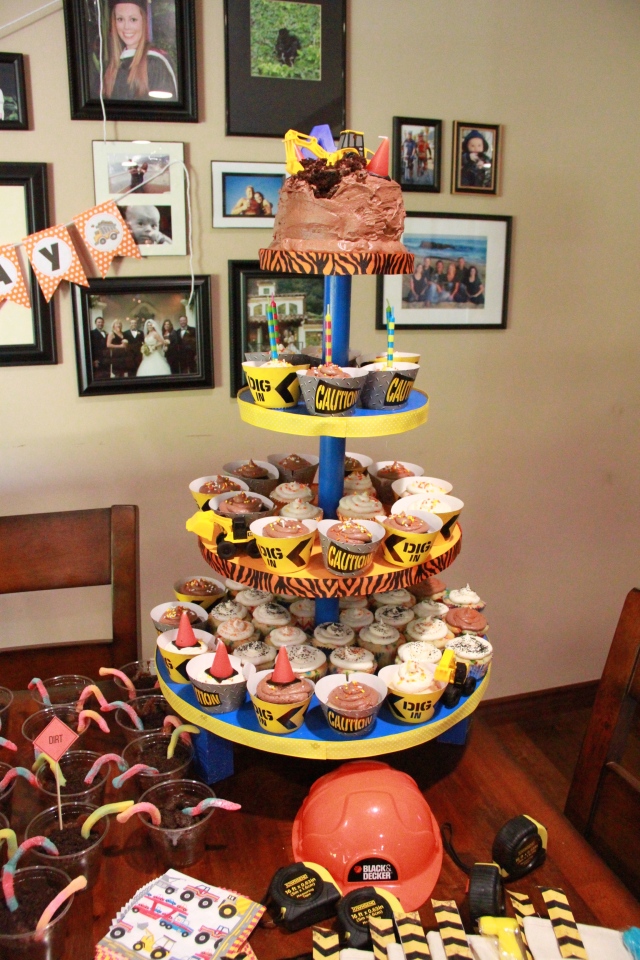 My awesome neighbors helped me to make these adorable wafer trucks.

The awesome paper big rig was an online deal I found on Zulily. It made noise and came with the cute “car” cupcake carriers. It is made by Meri Meri. 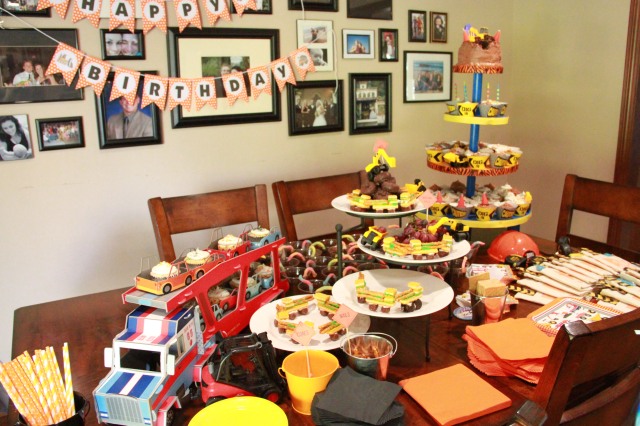 A quickly-made sign; the actual banner portion is from Target.

Each child guest had a hard hat (Oriental Trading Co. ) with his or her name on it. 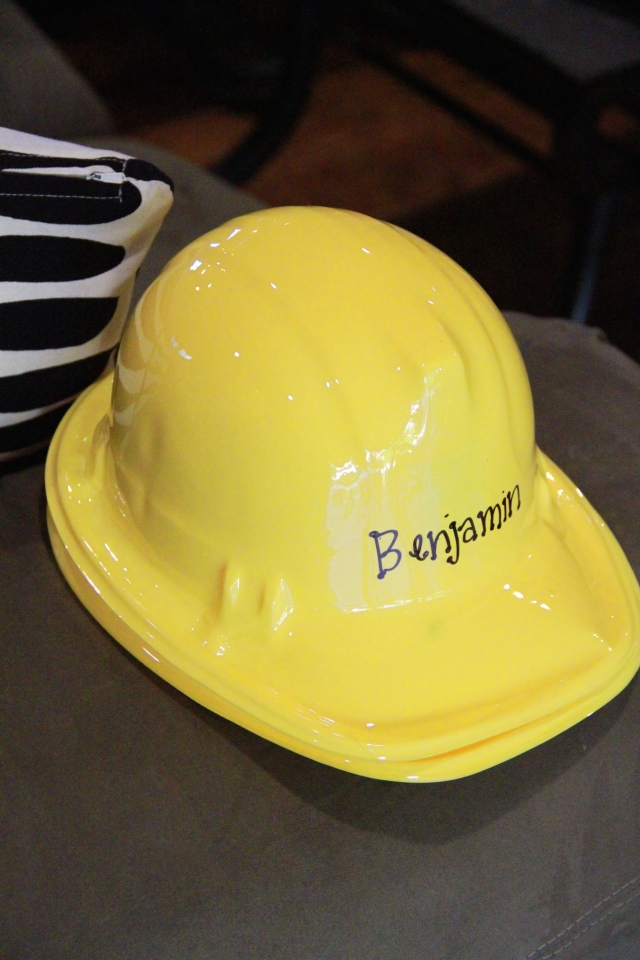 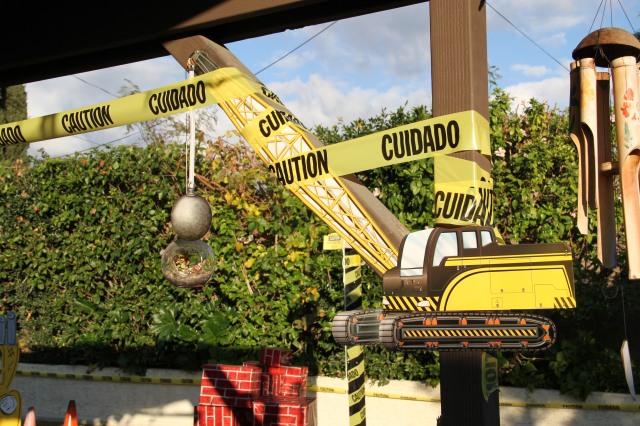 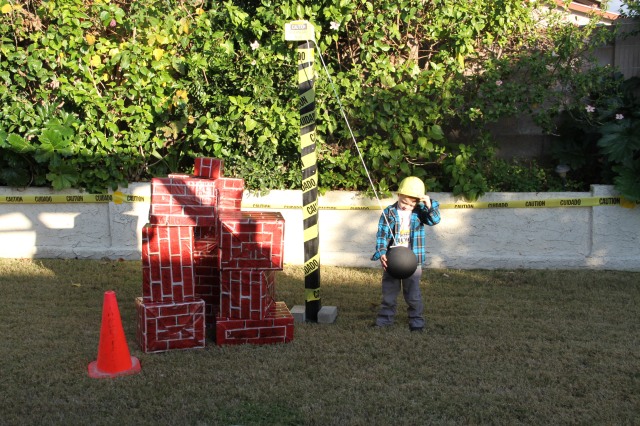 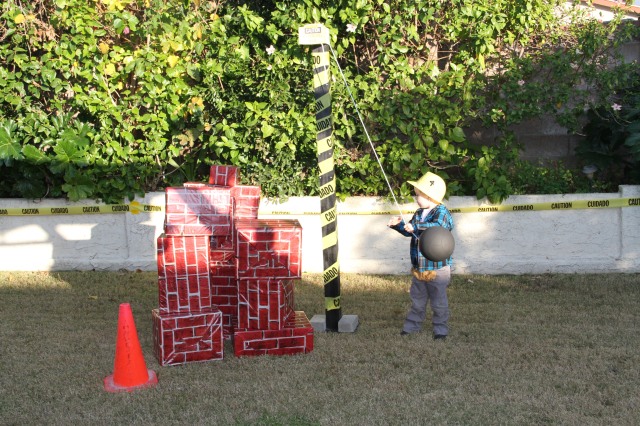 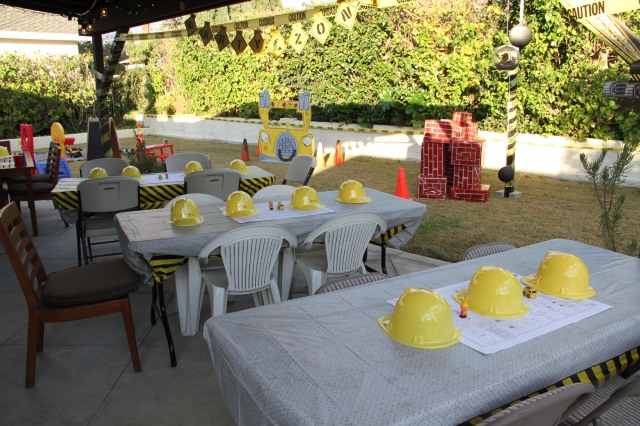 My “centerpieces” consisted of plans, squeezy construction toys for the youngest guests, and the hard hats.

These wet paintbrushes come courtesy of my Mime’ and cousin Charlotte. So cute!

I found the cone candles on Amazon.

Per usual, homemade cupcakes in chocolate and funfetti with chocolate buttercream and marshmallow buttercream frosting. The sprinkles are conveniently yellow, orange and white, and Charlotte keenly noticed that they *may* have been Halloween sprinkles. 🙂 Whatever works! 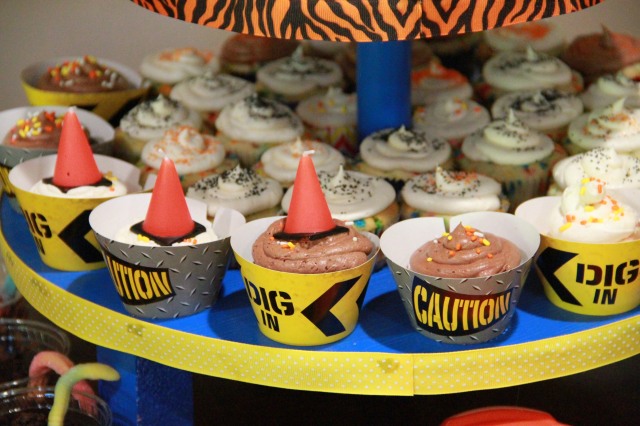 Lisa kindly decorated this cupcake stand to suit the party. Thanks, friend! 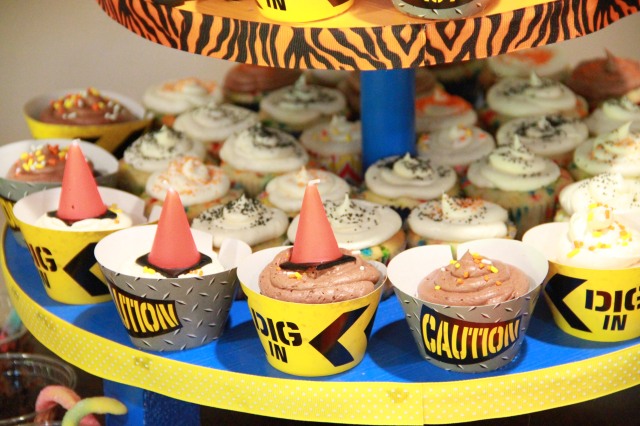 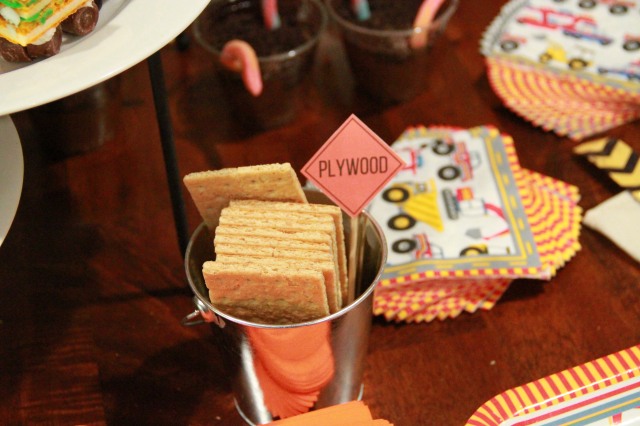 Here is Lisa with my baby. ❤

Since Jacob’s birthday falls in mid-December, I can only decorate the house so much, as it is already decorated for Christmas. But it’s a nice time to have guests when your house is extra cheery! 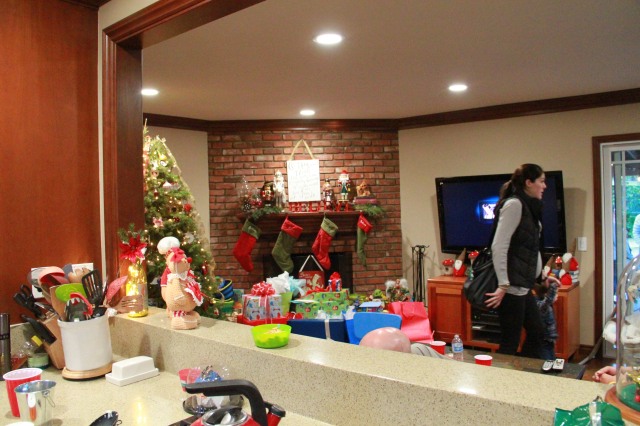 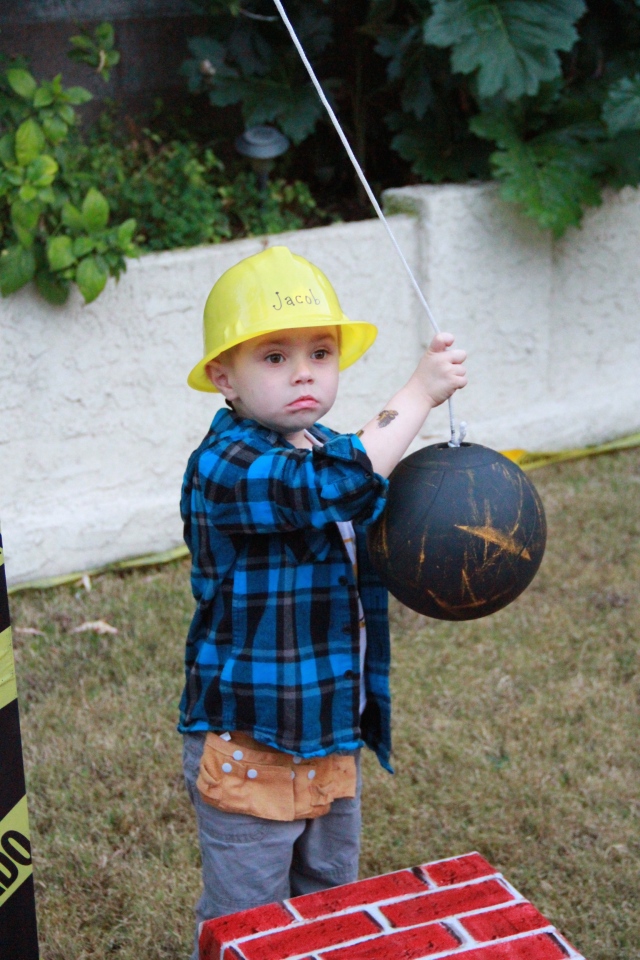 Even baby brother was dressed for the theme.

A beautiful card made by Gina. 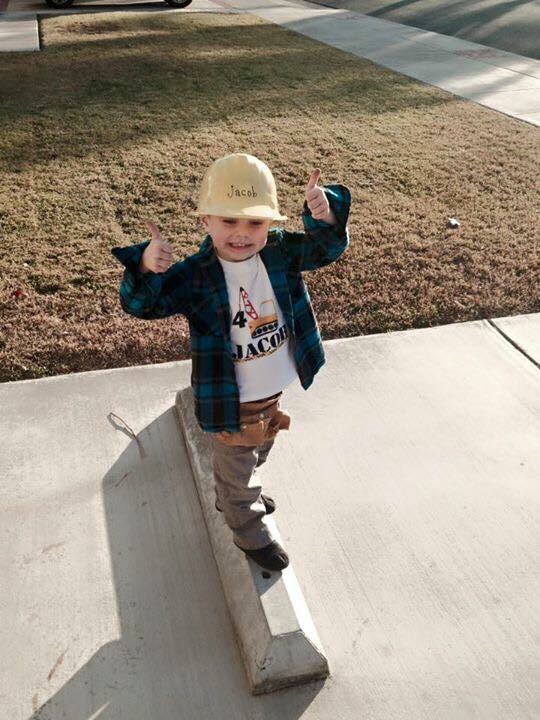 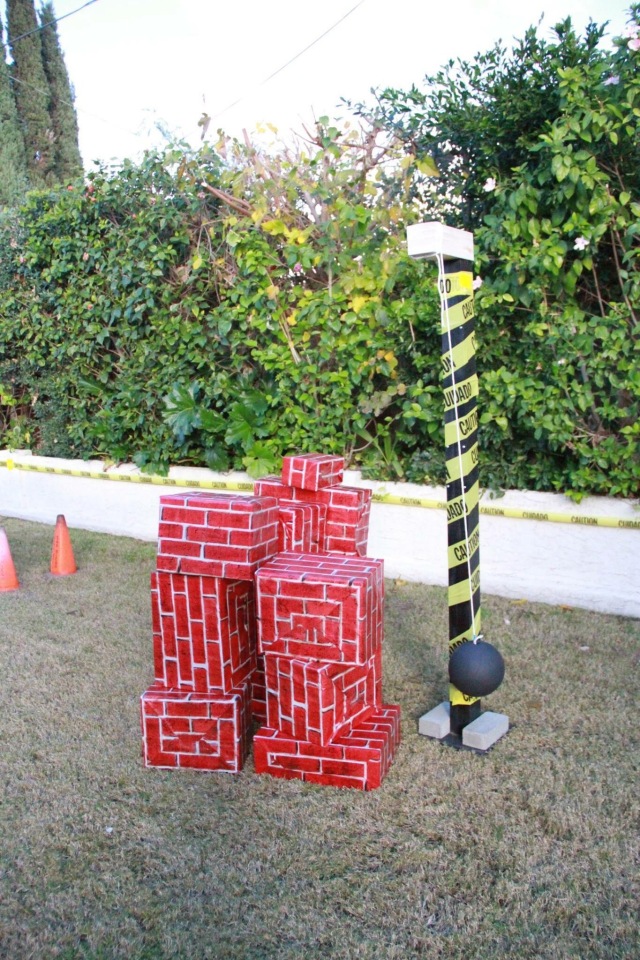 That’s it for this post! I hope you enjoyed it. Questions? Leave them in the comments. I’m happy to help you put on this little boy’s dream party!