This little pumpkin is 9 months old!

He is a mover and a shaker! Literally. He is constantly moving and he loves to shake things. 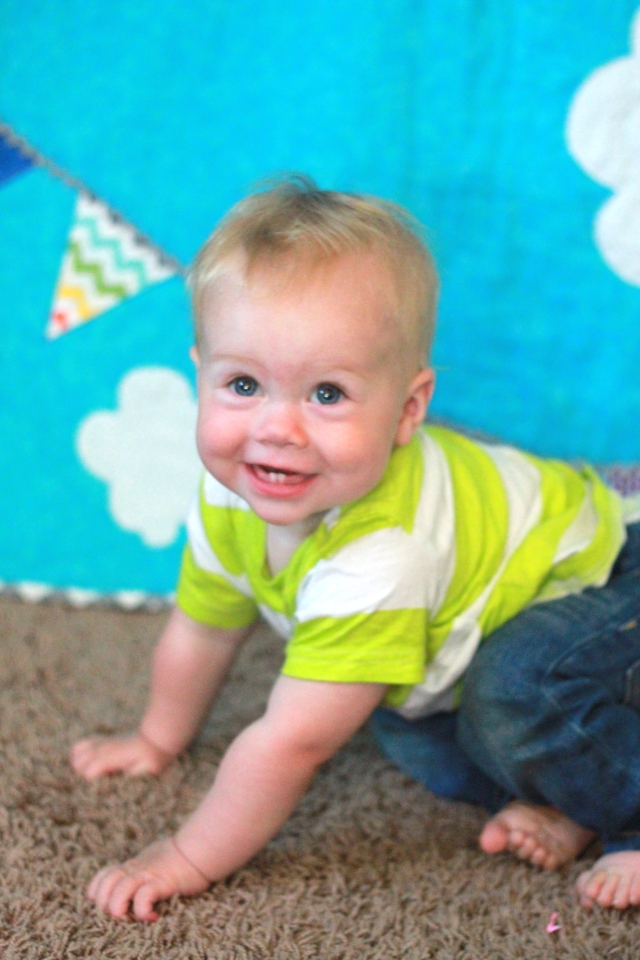 The last two months have been rough on our guy. He had a sudden change in behavior. He became clingy and started to cry often (which was so unusual for him). After a couple of intense screaming spells, I started calling the doctor and trying to get him seen. He was not latching on to eat and everything was just…off. One trip to urgent care and a visit to the pediatrician and another to an ENT specialist and we had our answer: a button battery burn on the roof of his mouth. Basically, he put a small lithium ion battery in his mouth and sucked on it, probably for less than one minute, and it started a chemical reaction in his mouth that resulted in a chemical burn. It was a stressful and difficult time, but he is starting to emerge from the pain and return to his sweet and happy self. 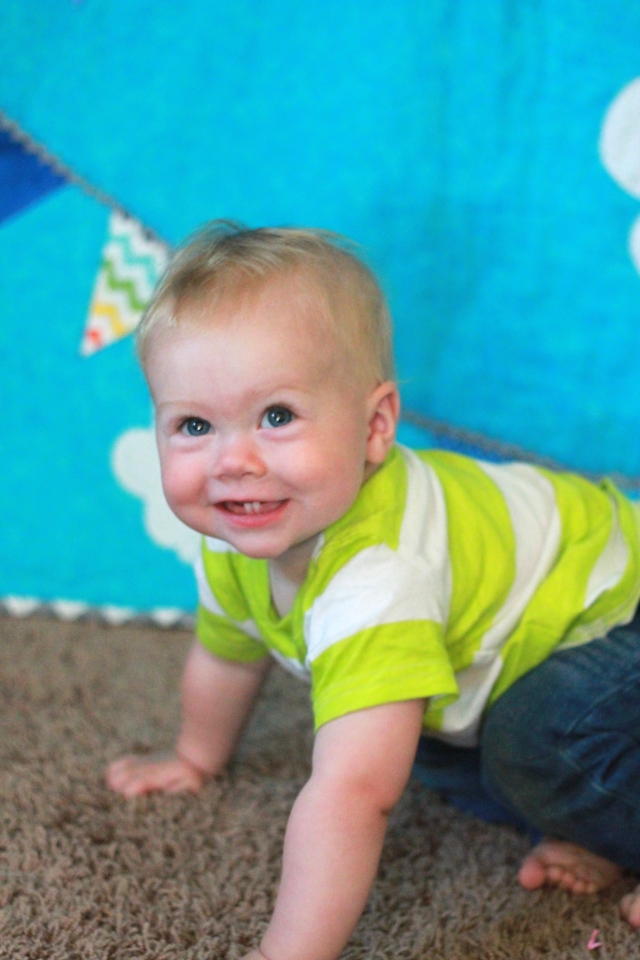 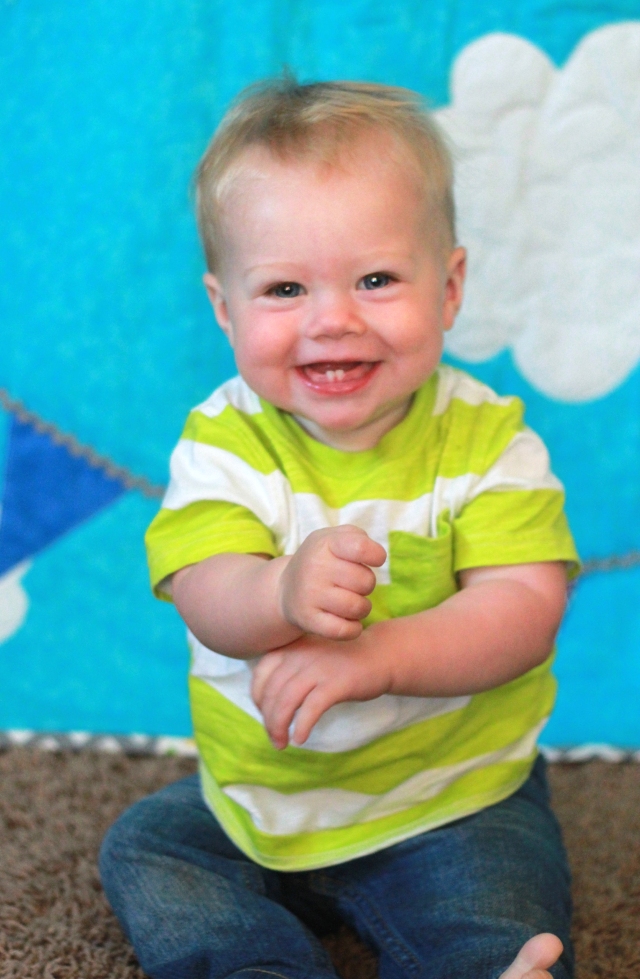 He is always in motion. He climbs my body and touches my hair, my eyelashes, my nose. He crawls really fast, pulls himself up on anything, and dances, shakes, cruises, and climbs. He will climb up the couch and reach for a plant way above his head. He will push a laundry basket while walking behind it. He has no fear and launches himself into any number of dangerous situations with a smile. 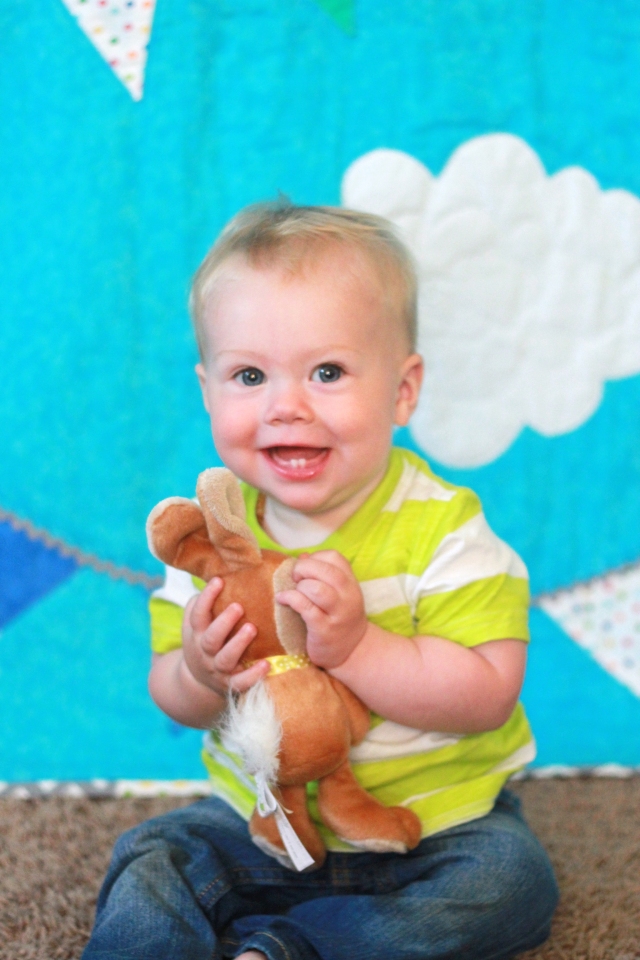 If you can, imagine me taking these pictures: I would sit him up against the backdrop of his quilt, and get one picture in before he popped down onto all fours and crawled at my camera. He pulled down the quilt, ate the edges of it, and drummed the “months” sign onto the ground. Everything is fascinating, which is, in itself, quite fascinating. 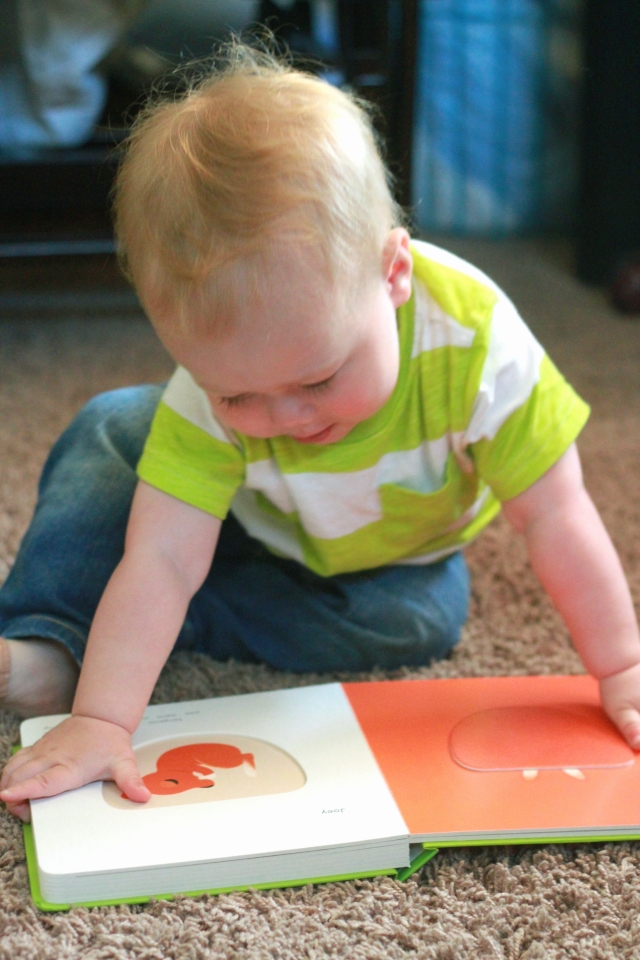 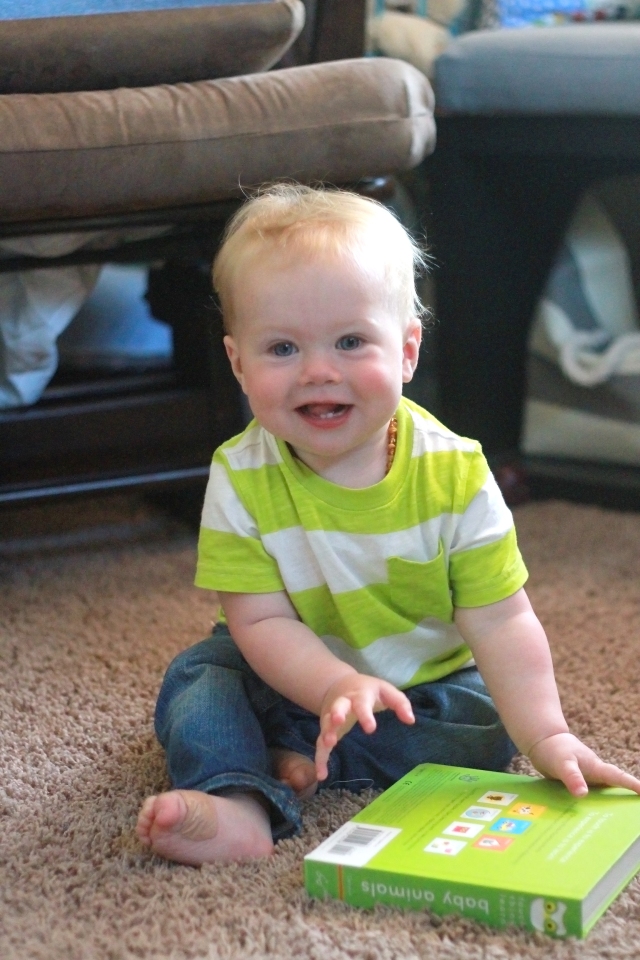 He never sits still. He still prefers mommy most of the day, and I hold him most of the time. He has been enjoying exploring big brother’s world and toys, and loves to crawl around the grass and dirt, shoving random leaves into his mouth. 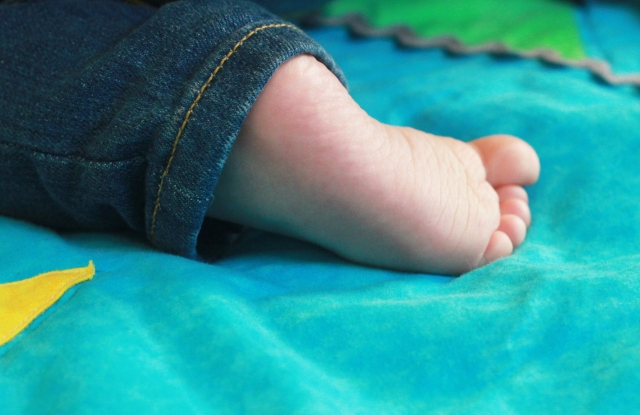 His voice is still quavery and so-so sweet. He sounds like a baby doll or baby sound effects in a movie: perfect squeals, squeaks, coos and goos. His baby talk is adorable. He says “ga-ga-ba-ba-ba-ba-goo-BOOO!” as though he is telling you the most important thing you have ever heard. When he gets upset, he cries and babbles to me. It sounds like he’s saying “mama a boo boo!”

He definitely, according to independent sources who are not his mother, has been saying “mama” since around 8 months. So his first word, for the official record of life, is also his favorite person and security blanket: MAMA. I am honored. Thank you for the applause!

His hair is definitely curly! YAY! When it gets wet it curls right up, and the back of his head has started to sport little curly-cues throughout the day. My parents still think it looks red; I am not sure. 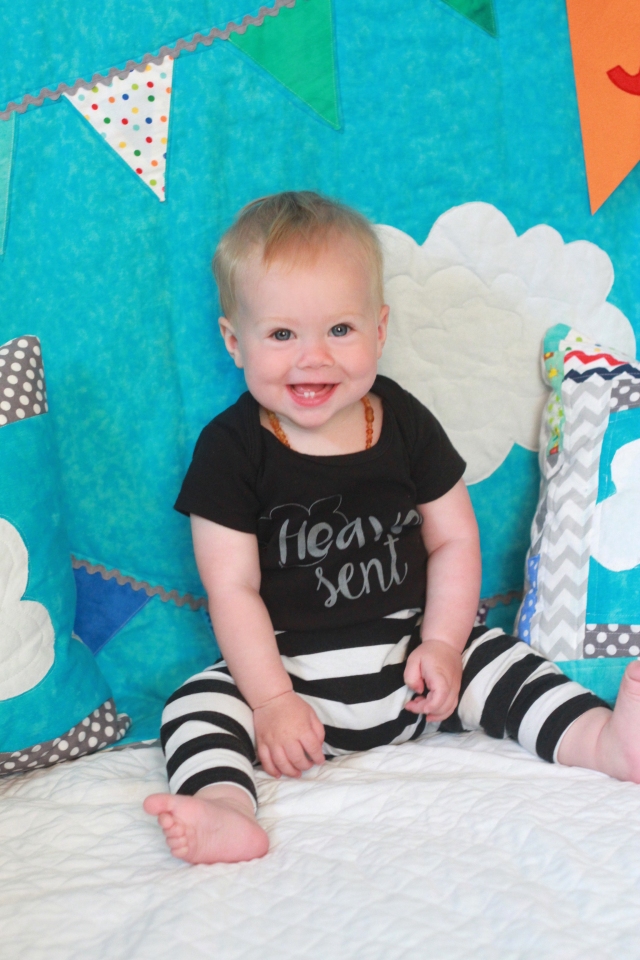 He still has his two perfect little jack-o-lantern teeth, but I can now see the telltale signs of top teeth about to erupt. The left tooth seems closer to the surface, but they are both visible beneath his gums.

This boy loves his daddy! He reaches for him and crawls to him and just delights in his presence. I am not jealous. I promise. He wants to be involved in everything that Josh and Jacob do. I have rarely seen him happier than when he had his first ride in the bike seat recently. His little head in the helmet was like an adorable mushroom. His eyes were bright and his smile wide. His head swiveled around to take in all of the sights and sounds. Sometimes he leaned down to look under the front of the seat and peak at Jacob from another angle. Now, just at the sight of the bicycle, he kicks his legs and flails his arms with pure excitement. It’s just the cutest!

At his 9-month checkup, this little bundle weighed in at 19.7 pounds. He remains in the 51st percentile for weight. He is a solid, heavy boy, and no one can believe that I carry him around all day! His legs look leaner to me now that he is on the move, and he doesn’t have the third roll I was predicting, but he is still deliciously round and soft and squishy.

He still hates the car seat most of the time, and I think it’s because he just wants to be held, and being in that seat is NOT his plan. Sometimes he shrieks out of anger when I place him in the seat, or holds onto my arm as hard as he can, or reaches both arms to me in a plea to pick him up. If I do not remove him from said seat promptly upon opening the back door, he is very upset with me, and may treat me to some back arching and another shriek. 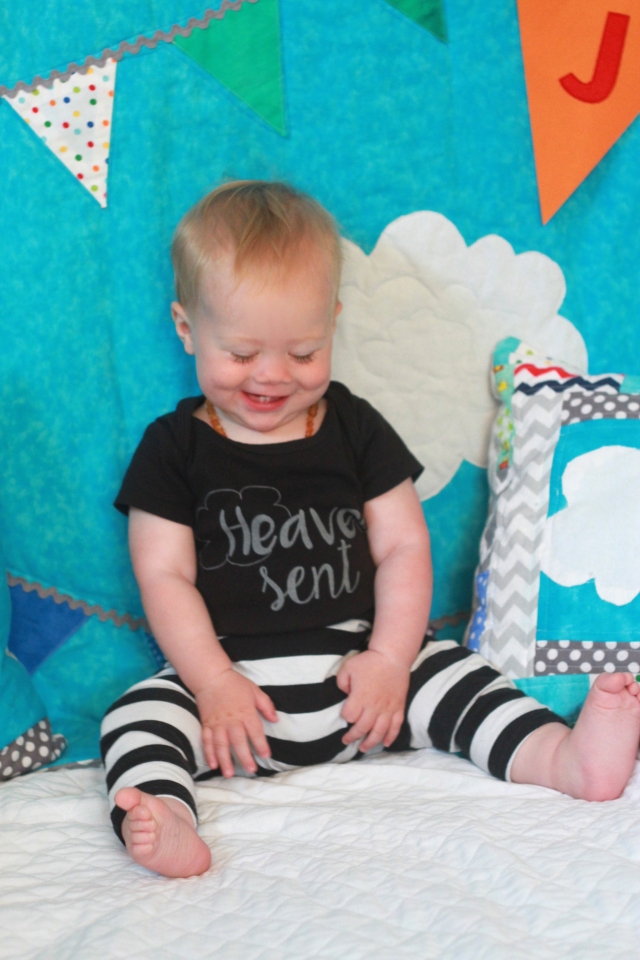 My baby makes his desires known. He refuses any food that I have to spoon into his mouth unless he can control the spoon. So far, he’s eaten only yogurt that way, and maybe a total of a teaspoon of it. He will chew on solid things, like pieces of fruit or bread. I think he’s eaten a few plain Cheerios and some veggie sticks (like baked straw-type things) as well as some strawberry, tortilla, and bread. That’s about all he has been interested in of the very many things I’ve tried. He is still vomiting on occasion when he eats solids, which I am hoping he grows out of before we have to take him to see an occupational therapist. I think he is a bit delayed because of the mouth injury, but that he also just hasn’t been ready to eat solids. He has only really shown an interest in them very recently. 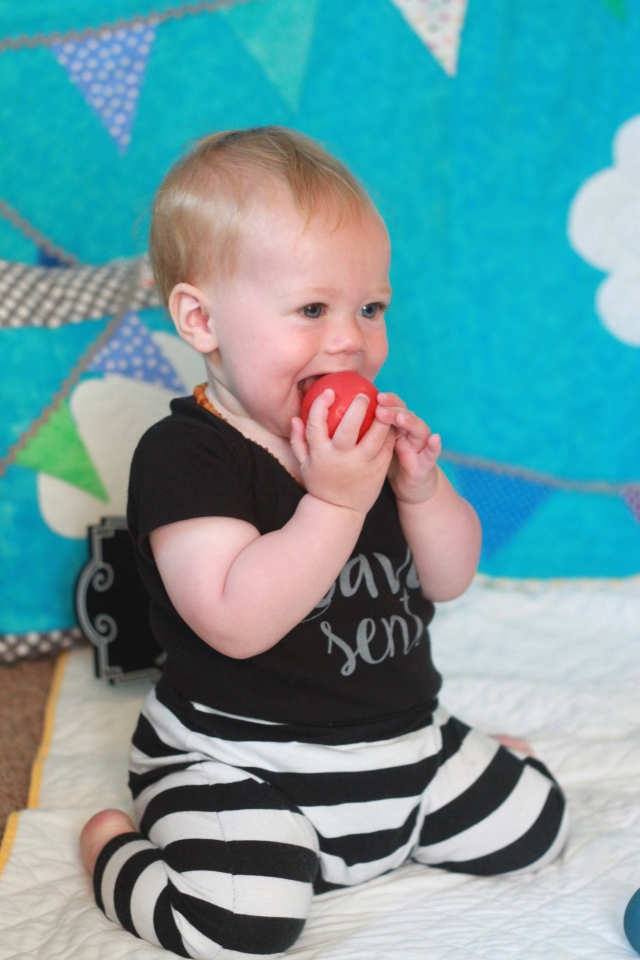 He reaches out for people that he wants to hold him, and grabs onto me with both arms when he prefers not to be taken from me. When I pick him up, I am often the recipient of a magical thing: a baby hug! He wraps his soft little arms around my neck and nuzzles in for a squeeze. It is about the most wonderful experience one could have.

If I were asked to count the number of times in a day that I kiss this magical creature, or squeeze his soft thighs, or stroke his perfect round head or soft belly, or laugh contentedly at his melodic sounds…well, I just couldn’t keep track. He brings me immeasurable joy.

The 9-month milestone has been a rather difficult one for me. In part because I’ve had such personal tragedy and heartache to deal with, and yet, I have this joyful and magical creature living with me who is untouched by it all. Also, I feel as though I were pregnant for about 7 years, and yet the last 9 months with Jackson on the outside have gone by in a flash. I am trying to soak it all in and enjoy every last moment as best I can. What a great time in my life right now–to enjoy this sweet babe and all of his beauty and curiosity. I am blessed.